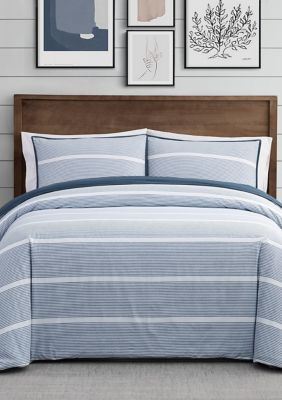 Brooklyn Loom Niari Yarn Dye Stripe Duvet Set. Classic horizontal yarn dye stripe in softer shades of grey and blue or beige and grey. Yarn-dyed color means the color is in the yarn and the fabric maintains its look for years to come. The face is made of yarn-dyed cotton and the reverse is a solid color cotton cloth. This set also includes coordinating sham(s) in the same color and fabric as the bed. All items are machine washable. Face fabric is 100% cotton with a yarn-dyed pattern woven into the cloth. The reverse is woven 100% Cotton fabric. This item is machine washable, but care should be taken to wash in appropriate size equipment to avoid damage. This item is imported from India. The duvet cover has internal corner ties and a button enclosure. Comforter insert is not included and should be purchased separately. Full/Queen Duvet Cover Set Includes: 1 Duvet Cover: 90 in x 90 in 2 Standard Shams: 20 in x 26 in King Duvet Cover Set Includes: 1 Duvet Cover: 104 in x 90 in 2 King Shams: 20 in x 36 in

Yarn dyed color means the color is in the yarn and the fabric maintains its look for years to come.

It took a little bit of time and effort to get the cover on but it was worth it!